What’s the book about? Written by two former Navy SEALs, this book explores the essential elements of effective leadership.

Who is this book for? Leaders, Military Personnel, People who are operating within teams (Business & Sport), and Entrepreneurs.

It’s been a few weeks since I completed Extreme Ownership on my kindle. In the meantime, I’ve now had the opportunity to reflect upon the lessons and concepts of the book and give you my thoughts on this leadership guide. For the regular readers here at Capable Men, you’ll be familiar with at least one of the co-authors of this book who has frequently featured in some of our most recent work.

Jocko Willink is the main man at one of my favourite podcasts on the internet today – The Jocko Podcast. (If you haven’t listened to this yet, you’re missing out on something special!) The co-author of this book, who is not quite as well known is Leif Babin. Leif is also a former Navy SEAL officer, A graduate of the U.S. Naval Academy, Leif served thirteen years in the Navy, including nine as a Navy SEAL. As a SEAL platoon commander in SEAL Team Three’s Task Unit Bruiser, he planned and led major combat operations in the Battle of Ramadi alongside Jocko back in 2006.

Jocko Willink served as a Navy SEAL for twenty years. He fought in the Iraq War. For his efforts during the Battle of Ramadi and throughout his career, he was awarded numerous medals including the Silver Star and the Bronze Star. When Willink returned home, he served as a Navy SEAL instructor. Jocko retired from the Navy in 2010 and launched Echelon Front with Leif Babin. He uses his expertise to teach leadership beyond the military and serves as an executive coach. He is the author, along with Leif Babin, of Extreme Ownership: How U.S. Navy SEALS Lead and Win. 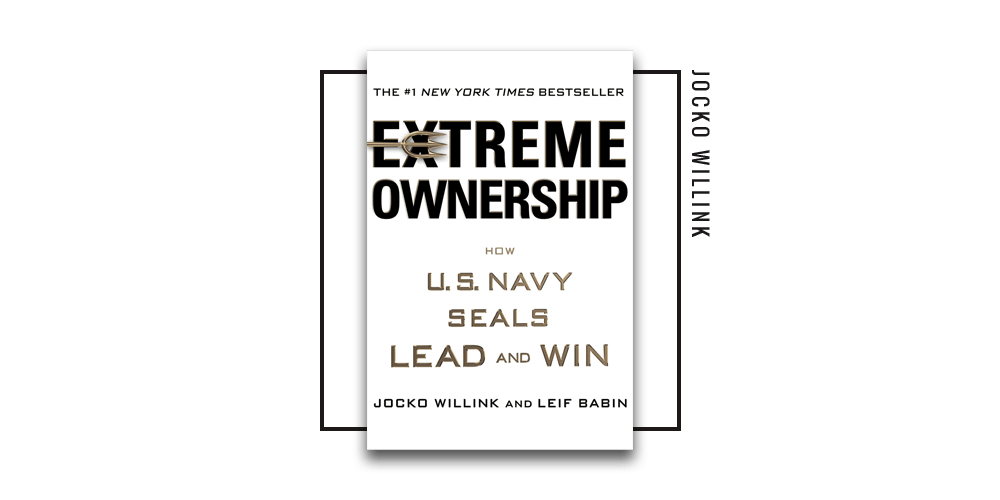 Who should read this book?

The premise of this book is simple. A fundamental guide to leadership principles (No theories, only battle-tested lessons) that have proven to be the most effective method to lead teams at an elite level in a high-stakes environment. The book explores the fundamental flaws of human psychology and how emotions and ego are often the culprits of poor leadership decisions.

Extreme Ownership breaks down each principle into its own chapter that is furthermore broken down into 3 sections.

This is the fundamental principle of this book that has the potential to be life changing for those who can leave their ego at the door. Leaders must own everything in their world, there is truly no one else to blame when things go wrong except for yourself. Humans inherently are creatures of self-preservation and the concept of owning failure is naturally going to be counter-intuitive for most.

This book challenges you to dismiss this way of thinking, and be the person who owns the failure of a task while ensuring it never happens again. Even for those of you who find yourselves powerless and near the bottom of a bureaucratic leadership structure, this book offers functional advice to lead from beneath and up the chain of command. This refreshing approach aims to cut directly into the blame culture that is so prevalent today by removing the predictable excuses and justifications so often used to justify poor performance and bad decision making.

“Any team, in any organization, all responsibility for success and failure rests with the leader. The leader must own everything in his or her world. There is no one else to blame. The leader must acknowledge mistakes and admit failures, take ownership of them, and develop a plan to win.”

I’ve always been quite sceptical of warfare literature that makes an attempt to transition their applications to the civilian environment. How many renditions of the Art of War have been developed for the corporate boardroom through a metaphorical and emblematic approach? Extreme Ownership had no issues for me in this regard as its core principles ultimately apply to the human condition and don’t demand the particulars of a specific environment.

Although I could never visualise Jocko offering corporate advice seriously without picturing something along the lines of this:

To digest the information of this book without bias, I attempted to analyse each principle in comparison with my own reality. Looking back in my own life, I found myself remembering the times when leaders failed to get their point across in my military career—Then I began to think back to all the times it happened during my time working in the private security sector. (Including my own leadership failures) It was overwhelming and humbling to discover that the principles of this book would have offered the framework of leadership that would have prevented many of the failures and issues that I encountered in my past.

Many of these principles may not be new to experienced leaders. A very wise man and former USAF pilot/instructor by the name of L/C Mike Vaught has written about some of these highly effective leadership principles in a personal write-up he made for this blog.

Undoubtedly the most enjoyable book I’ve read this year so far. You’ll be amazed at how effectively you’ll be able to highlight leadership problems from afar once you have digested the concepts of this book. I’ve already passed on a copy of this book to a good friend of mine and I suspect it may be the Christmas gift of choice for a few more in the future.

I implore all of you who are in leadership positions or find their roles highly dependent on effective leadership, to buy Extreme Ownership immediately and take the appropriate steps outlined in the book to become a strong leader and ultimately a more effective, capable man.