Gaius Julius Caesar, born on July 12, 100 BC was a Roman general and statesman. A member of the First Triumvirate, Caesar led the Roman armies during Gallic Wars before defeating Pompey, his political rival in a civil war. From 49 BC, Caesar became the dictator of Rome. However, he played a central role in the events that led to the demise of the Roman Republic and the rise of the Roman Empire. On 15 March, 44 BC Caesar was assassinated by his Senators.

Caesar returned triumphant from his campaign abroad. In 84 BC, he was chosen High Priest of Jupiter. Following this, Caesar was taken hostage by the pirates but his freedom was negotiated successfully, only to kill his captors later. In 77 BC, Caesar used his oratory skills in the political arena to become a successful lawyer to favor commoners. Later on, he was appointed praetor, a position in Rome similar to that of a judge. Gaius Julius Caesar was born on July 12, 100 BC, to his father, also named Gaius Julius Caesar, and his mother Aurelia Cotta. Julius Caesar was also the nephew of Gaius Marius, a famous Roman General. Caesar traced his lineage to the origins in Rome and claimed descent from the goddess Venus through the Trojan prince Aeneas and his son lulus. However, despite their alleged noble heritage, Caesar’s family was neither wealthy nor particularly influential in the politics of Rome.

After the sudden death of his father in 85 BC, Caesar became the head of the family at the age of 16. It was the midst of a civil war between the Roman ruler Lucius Cornelius Sulla and his uncle Gaius Marius. In 84 BC, Caesar married Cornelia, the daughter of an ally of Marius. Caesar and Cornelia had one daughter named Julia. In 82 BC, Sulla won the civil war.

After winning the civil war, Sulla ordered Caesar to divorce Cornelia. Caesar refused to divorce Cornelia and went into hiding. His family intervened and convinced Sulla to spare Caesar’s life. However, Sulla stripped Caesar of his inheritance, his priesthood, and his wife’s dowry.

Despite his pardon, Caesar left Rome and joined the army. In 80 BC, Caesar won the prestigious civic crown for his bravery during the siege of Mytilene. In 78 BC, after Sulla’s death, Caesar returned to Rome and became a successful prosecutor. Due to his oratory skills, he was widely known in Rome.

In 75 BC, while crossing the Aegean Sea on his way to Rhodes to study oratory and philosophy, Caesar got captured by some murderous pirates. According to some reports, Caesar acted more like an authoritarian leader with the pirates than with their captives. His freedom was negotiated over the ransom. However, Caesar hired a private fleet to hunt them down and had them crucified for their crime. Caesar soon began his political career in earnest. In 69 BC, he became the military tribune and then quaestor of Hispania, a Roman province. In the same year, Cornelia died after 13 years of marriage to Julius Caesar. In 67 BC, Caesar married Pompeia, a relative of Gnaeus Pompeius Magnus (Pompey the Great) and the granddaughter of Sulla. Furthermore, Caesar made an important alliance with Gnaeus Pompeius Magnus along with this marriage.

Caesar became an aedile in the year 65 BC. It is an important Roman magistrate position where he produced lavish plays at the Circus Maximus. As a result, it endeared him to audiences but left him deeply in debt. Two years later, Caesar was elected Pontifex Maximus.

After 5 years of marriage with Pompeia, Caesar divorced her in 62 BC. It was due to the major scandal incited by a politician by dressing up as a woman and taking part in the sacred women’s festival held by Pompeia.

A year later, Caesar became governor of Spain. In 59 BC, Caesar was elected as a Chief Roman Consul. It was due to the series of successful political and military maneuvers, along with the support of Marcus Licinius Crassus, a known richest man in Rome, and Pompey. Caesar, Pompey, and Crassus soon formed an informal alliance strengthened by the marriage of Julia, the daughter of Caesar to Pompey. This alliance was known as the First Triumvirate.

The Roman Senate was terrified by the union. It is because the Senate knew that a partnership between three powerful men was unstoppable. However, the Roman Senate was right about it and the triumvirate got control of Rome within no time. In 58 BC, Caesar was appointed governor of the vast region of Gaul (North-Central Europe) where he commanded a large army. During the Gallic Wars that followed, brilliant campaigns were led by Caesar to stabilize and conquer the region. As a result, he earned a reputation as a ruthless and fearsome military leader.

Caesar built a bridge across the Rhine River to Germanic lands and crossed the English Channel to Britain. The great success of Caesar in the region made Pompey resentful of him. The actions got complicated and strained the relationship between Crassus and Pompey. The political situation in Rome became increasingly unstable as Caesar conquered Gaul.

At that time, Pompey was his sole consul. After the deaths of Pompey’s wife, Julia in 54 BC, and Crassus in 53 BC, Pompey sided with Caesar’s opponents. He ordered Caesar to abandon his army and return to Rome, which he refused. Therefore, in a decisive and bold move, Caesar ordered his army across the Rubicon River into Italy. It triggered a civil war between the followers of Caesar and Pompey. However, Caesar and his armies pursued Pompey to Greece, Spain, and finally Egypt. On September 28, 48 BC, young pharaoh Ptolemy VIII got Pompey killed. It was in the hope to prevent Caesar from invading Egypt. When Caesar entered Egypt, Ptolemy presented him with the severed head of Pompey. However, Caesar found himself in the middle of a civil war between Ptolemy and Cleopatra, an Egyptian co-regent. Caesar fell in love with Cleopatra and partnered with her to overthrow Ptolemy. As a result, Cleopatra got to rule Egypt. 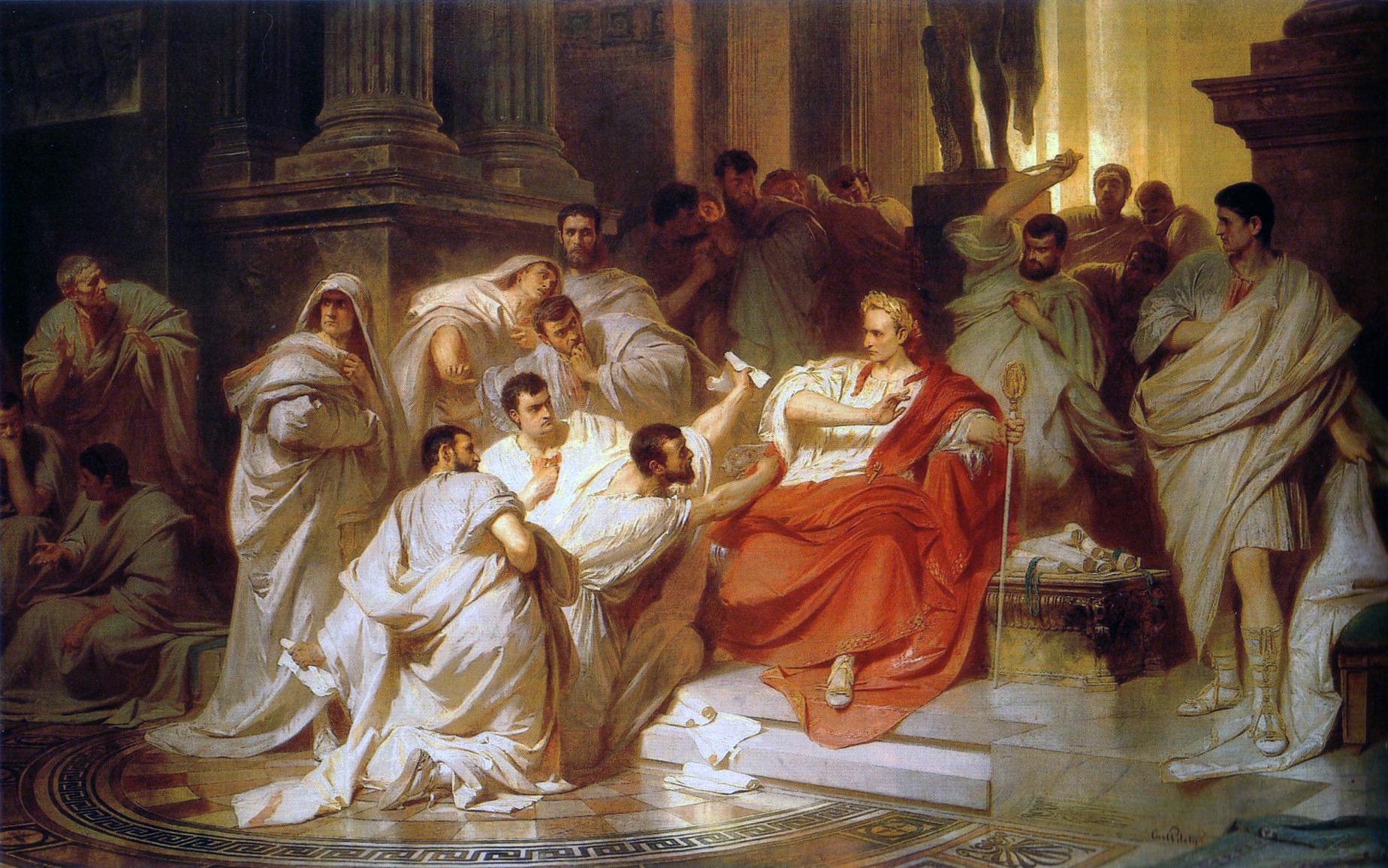 For the next few years, Caesar wiped out his enemies, including what remained of Pompey’s supporters in Spain, Africa, and the Middle East. In 46 BC, Caesar was appointed dictator of Rome for the next ten years. It outraged his political opponents. Furthermore, his dictatorship set the stage for the eventual end of the Roman Republic.

Not to forget, there were several drastic reforms made by Caesar to benefit the middle and lower classes of Rome as follows: In 44 BC, Caesar declared himself dictator for life. However, his quest for absolute power was not liked by many politicians of Rome. They feared that he might become the king, so a group of senators conspired to kill Julius Caesar.

On March 15, 44 BC, the senators led by Marcus Junius Brutus, Decimus Junius Brutus Albinus, and Gaius Cassius Longinus stabbed Julius Caesar 23 times. As a result, it ended both his reign and life as he fell bleeding on the floor of the Senate and at the foot of a statue of Pompey.

Julius Caesar was assassinated at the age of 55 which made him a martyr. However, it triggered a civil war that led to the fall of the Roman Republic. Gaius Octavius, also known as Octavian, was a grandnephew of Julius Caesar and rose in power. Later on, he was known as Augustus Caesar and emperor of the Roman Empire.

Julius Caesar was a renowned scholar, politician, and general in Ancient Rome. He conquered the vast region of Gaul. However, Caesar initiated the end of the Roman Republic after becoming the dictator of the Roman Empire. He was not only a brilliant military prowess but his political skills and popularity among the middle and lower classes of Rome made him a leader. Although his dictatorship was short-lived, he made several drastic changes for these classes.

Julius Caesar was not only a good leader but also wanted to change the Roman world. His greediness, on the other hand, to become a King got him killed by his senators. However, Julius Caesar is a controversial character from Ancient Roman history. One can argue about his leadership qualities but one can contradict his actions. Therefore, despite being from neither a wealthy nor an influencing family, he demonstrated his prowess on the battlefield and in his early career in different government positions.